A country with relaxed people in southeast Europe for an unforgettable vacation.

Bosnia and Herzegovina extends over about 51 thousand square kilometers in southeast Europe. It borders with Croatia in the north, northwest and south, and Serbia and Montenegro in the east. In Neum, however, it has access to the Adriatic Sea. The largest part of its territory in the Western Balkans form high mountains and rocks, which are covered with pastures and forests. In geopolitical terms it is divided into the Federation of Bosnia and Herzegovina, the Republic of Serbia and the District of Brčko.

The country has about 4 million inhabitants, the most Bosnians (48 percent), Serbs (37 percent) and Croats (14 percent). It is a country which is still recovering from war, economically and emotionally. The capital and largest city – Sarajevo – is situated on the river Miljacka in the eastern part of Sarajevo-Zenica basin. It is an mportant cultural, economic and industrial center of the country.

Bosnian cuisine is a blend of Turkish and Slavic influences. Plenty of meat, milk and dairy products and vegetables – are eaten here and in large quantities. In this region the Bosnian stew, various soups, meatballs, unavoidable ‘burek’, pies and baklava are famous. In parts of the country where alcohol is consumed, brandy and beer are mostly drunk- with the exception of Herzegovina, where they mostly enjoy in locally produced wines.

Meet the soul of Sarajevo! Walk through Baščaršija – the famous shopping part of town that is proud of its architectural achievements of Ottoman culture. Take a look at the imperial mosque, the cathedral and the town synagogue, and many museums. In recent years Sarajevo became the host of the most powerful film festivals in the region, which gathers the most famous names in film every July. 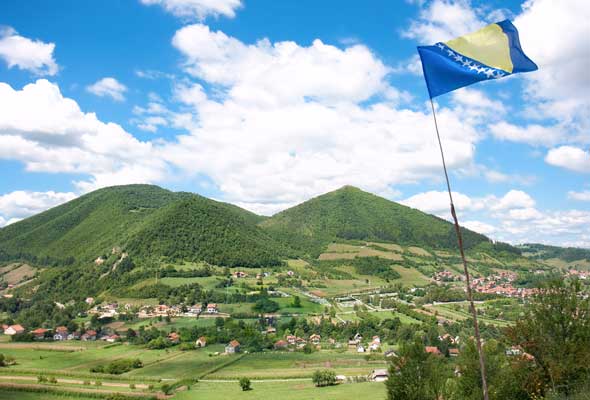 The alleged Bosnian pyramids have attracted a lot of media attention in recent years, which are located in the central part of the country, near the town of Visoko. These are actually pyramid-shaped hills, for which the researcher Semir Osmanagić claims that are the result of shell structures, rather than natural phenomena. Although the scientific elite deny these allegations, there are more and more tourists in the center of Bosnia.

Neum is the only city in Bosnia and Herzegovina on the Adriatic coast, characterized by long sandy beaches and crystal-blue waters, and in the summer months it is a real tourist mecca. During winter, the action moves to the popular ski resort Jahorina, Vlašić, Kupres and Bjelašnica, which offer a lot of fun, but cheaper prices when compared to the ski destinations in the region.

Explore the Bosnian wilderness in Kozara National Park, which occupies the Pannonian landscapes in an area of internal Dinarides in Bosnia. It stretches over 3520 hectares at an average altitude of 1000 meters, and brings together a rich flora and fauna typical for this area. This park is home to many mammals, birds and various species of trees and plants. 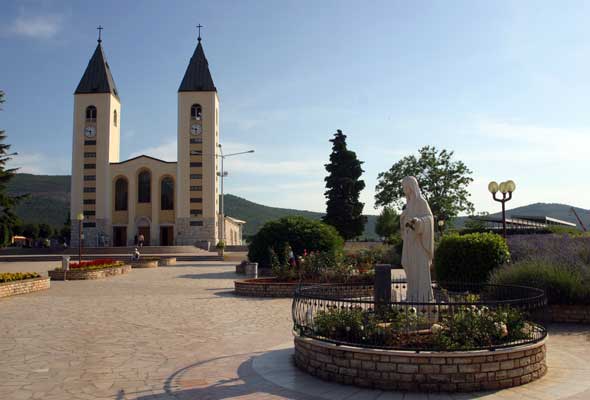 One of the most popular tourist destinations in the country is Roman Catholic Shrine of the Queen of Peace in Medjugorje in the south of the country. It became known in the eighties of the last century due to the apparition of the Virgin Mary to a small group of local residents. A center of gathering is, however, the church of St. James in the city center.

Official languages: Bosnian, Croatian, Serbian
Religion: Christianity (45 percent of the population), Islam (44 percent), other religions and undeclared (rest)
Currency: Convertible Marka (BAM)
Visa: Not required
How to travel:
BY PLANE: daily direct air line from Zagreb to Sarajevo
BY TRAIN: daily international train lines connect Croatia with Bosnia and Herzegovina
BY BUS: regular and organized international bus transport to the BiH
BY CAR: route Zagreb-Sarajevo (420 km), roads are ok, sticker not required
Disease and prevention: special vaccinations to enter the country is not required.
When to travel: Throughout the year
Accommodation: Hotel Bristol and Hotel Central in Sarajevo are an excellent choice.
Restaurants: Cybele and restaurant Spite House in Sarajevo serve local specialties.