First, I need to tell you how I started watching Game of Thrones earlier this year.

My boyfriend is generally reading a lot of books and watching a couple of TV shows such as Suits and Game of Thrones religiously. Earlier this year when there was a break in between seasons of Game of Thrones he persuaded me that he thinks I would really love the series and if I would like to watch all of the already aired episodes with him again starting from the first one. So I did.

At first, the show was a bit to bloody for me, in general I am not a huge fan of this genre, neither I am a fan of the way most female characters are treated but I was intrigued by the family stories behind it, really loved some strong female characters (grandma is my #1 favorite character

) and shocked by the overall developments. In short, I got hooked. After all, we all have a guilty pleasures. For me so far it was only a chic-lit & tons and tons of fashion magazines.

After I caught up with all the episodes of Game of Thrones, animal characters on jewelry got a whole new meaning for me, each animal reminded me of a particular family in the show (as if I wasn’t geeky enough) so I got inspired to write this post for other GOT fans out there who are also a true fashionistas!

Last week, here in Barcelona jewelry brand Aristocrazy (brand name totally suited to what is going on in GOT

) opened their store at Paseo de Gracia where one can also buy this Game of Thrones exclusive collection. 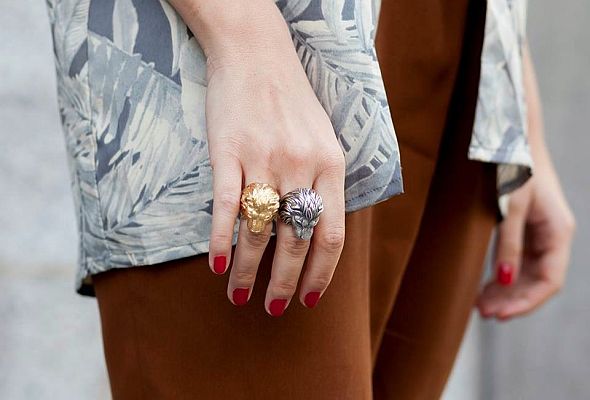 I already have a couple of pairs of earrings and a necklace from Aristocrazy and wear them often, now when the store is so close to me I will have to go and get my GOT ring as well! It surely won’t be Lanister

Which of the GOT rings would you wear?