If you are not working in humanitarian organizations to help Third World countries, there is little chance that you’ll dare to visit this African country with the longest coastline of the Black Continent in the near future.

Poverty, disease, civil wars, border conflicts, terrorist threats … Somalia is a country with hundreds of problems and it doesn’t surprise that only few travelers from the Western world choose to visit it. It covers approximately 637 000 square kilometers in the Horn of Africa, bordering Ethiopia, Kenya and Djibouti, and the Indian Ocean. Its coastline stretches to more than three thousand kilometers, which makes it the longest on the African continent.

Most of the approximately 9 million people are engaged in nomadic livestock farming and gathered in the cities along the Indian Ocean. The capital Mogadishu is situated on the coast of the Indian Ocean, and because of his position it was once considered as one of the major trading centers of Africa. Due to the frequent destruction there is a lack of tourist attractions in this area. However, passengers should certainly visit the market Baakara, remnants of the old town and numerous mosques.

Safer destination for tourists is Hargeisa – the second largest city in Somalia. Otherwise, some consider it the capital of self-proclaimed autonomous republic of Somaliland in the northwest.

Somali diet is based on a combination of rice and pasta (Italian influence) with various sauces dominated with mutton, beef and lamb. In addition to food Somali Bread (laxoox) is often served, and maraq traditional soup made ​​of vegetables, meat and legumes is eaten. Somali culture dictates that you always leave some food on your plate, because such gesture shows that your host offered you plenty in the beginning.

Also, consumption of alcohol is prohibited, and all over Somalia coffee, tea and various fruit juices are drunk.

Beach near the Somali capital city is an ideal destination for lovers of swimming and sunbathing. However, keep in mind that for women the law prohibits exposing the skin, and the members of the fairer sex can cool down in the sea only fully clothed.

Complex of caves and rock formations named Laas Gaal is situated in rural area near Hargeisa. Here you can see some amazing examples of rock art and cave drawings dating from the 9th millennium BC.

Hargeisa is proud of his mosque in the center of the city, as well as its monument of independence (a large hand holding a map of Somaliland). Visit Naas Hablood hills around the town that are considered to be its magnificent symbol. 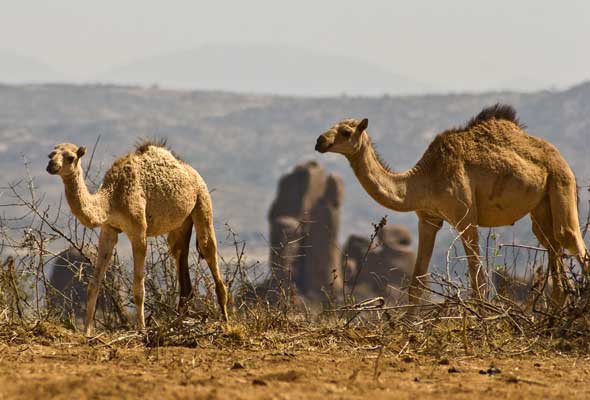 Explore the highest peak in Somalia – Mt. Shimbiris (2450 m), which is situated in the north of the country.

Go through the Jubba River, which passes the southern part of Somalia, and flows into the Indian Ocean. On the environmental side, savannah along the banks of this river is considered the richest part of the country. Here you’ll see an astounding array of African animals, lions and cheetahs, giraffes, hippos and crocodiles.

Official language: Somali and Arabic, the use of the English and Italian
Religion: Islam
Currency: Somali shilling (SOS)
Visa: required, the nearest Embassy of the Somali Republic is located in Berlin (tel. +49176 77107752, e-mail: somalembassy@live.com)
How to travel: by plane, one of the few international aviation companies that fly to the capital is Daallo Airlines with a center in the United Arab Emirates. However, safer routes include direct flights to the second largest city of Somalia – Hargeisa.
Disease and prevention: mandatory vaccination against yellow fever at least three weeks before the trip. Vaccination is performed in the Department of Public Health, Dr. Andrija Štampar in Zagreb. There is extremely high risk of malaria, typhoid and dysentery so it is necessary to take preventive steps.
When to travel: Somalia is largely desert country with high temperatures and occasional monsoon rains. The most pleasant time: from May to October.
Accommodation: Hotel Naas Hablood in Mogadishu and Hargeisa Ambassador Hotel in Hargeisa.
Restaurants: eat only in the hotel restaurant.

Hire a bodyguard when arriving in the country because you might need him. Drink only foreign brands bottled water. Eat in the tested areas. If you are a woman, respect the tradition of the place and dress accordingly. This is still an Islamic country, so covered shoulders and legs, are matter of general culture. Use the right hand in all contacts with the Somali civilians, since they consider left hand as impure. Be careful how you handle your digital camera. Photographing local women is prohibited, while you can take a photo of men only when they give you permission. Also pay attention when photographing buildings because the police could wrongly interpret your intentions and arrest you on suspicion of being a spy.