Thailand has always been one of the most attractive desinations for adventurers from all over the world. This exotic country in southeastern Asia is full of contrasts, and will leave you breathless no matter where you are. The capitol city Bangkok is chaotic at first glance, but has its charms that attract your attention on every step.

First thing you will notice in Thailand are the smiles on peoples faces. In a country of 65 million people that is an incredible, but completely true fact that all foreigners had a chance to experience when visiting this country.

Courteous behavior, especially with foreigners who live there, will shock you from the very first encounter. As for religion, 95% of the people are Buddhists, and their priests in orange robes and with perfectly calm faces are easy to notice.

"Every true gourmand will be literally knocked down by Thai cuisine, which is one of the most interesting and most respected in the world. When preparing a variety of specialties, they will always serve fresh and healthy foods with a wide variety of vegetables and exotic spices. "

Thais are very proud of their country who is the only one in Southeast Asia that has never been colonized. Thai-land means ‘free country’, whose residents cherish the special and surprisingly relaxed way of life, which makes them unique in the world. Their life philosophy can be broken down in the motto ‘Do not worry, relax and enjoy’, which is noticed literally everywhere. From ancient times until today, the people of Thailand behave with distinct respect to the royal family, especially to their king, Bhumibolu Adulyadeju (Rama IX). Thailands king has been on the throne since 1950, which makes him the longest living ruler in the world.

Every true gourmand will be literally knocked down by Thai cuisine, which is one of the most interesting and most respected in the world. When preparing a variety of specialties, they will always serve fresh and healthy foods with a wide variety of vegetables and exotic spices. They will always offer you with sticks, spoons, and fork. When it comes to Thai food, a knife will not be needed since the meat will already be in finely chopped pieces. Besides, a knife is considered a deadly weapon in this country and not a part of the dinner set. 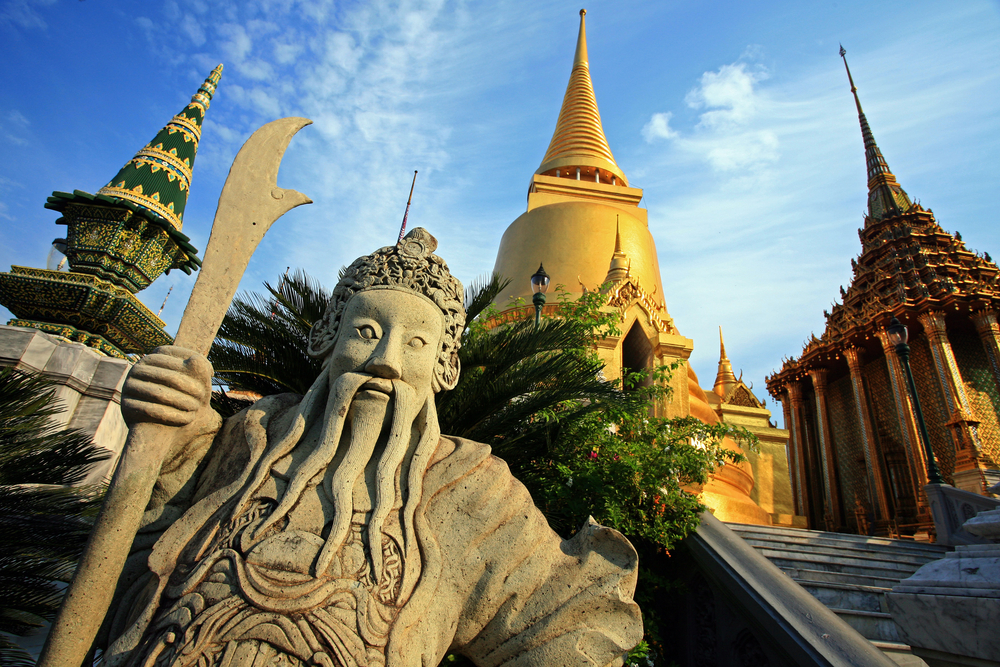 Have you ever head of elephants playing soccer? Yes, in Thailand this is possible! Every year soccer tournaments are organised where elephants are the real soccer stars. Running throug the grass they pass the ball and shoot for the goal while being led by their coaches. Although it might not seem like it at first glance, the elephants are extremely valued and cared for in this country. In Bangkok they are a special attraction for the tourists, who can feed them with fruit while the elephants will eat from your hand. Up until the elephants die, their guards spend most of their times with them in love and friendship.

With the elephants, you will also encounter monkeys in Thailand, and don’t be surprised if you see some of them climbing trees and picking coconuts in one of the luxury hotels. They have guardians that take care of them too. They make sure that one of them doesn’t climb on your head or make any kind of misdeed. You can approach and give them food freely, but only in agreement with their guards.

Bangkok is an ideal place, you can even say a heaven on earth, for shopaholics. In the city there are countless shopping centers where you can find everything – even the kitchen sink. There are outdoor and luxury boutiques with all the designer wardrobe your heart desires. For those who unable to buy expensive original clothes, it will not be too hard to find perfect copies in one of the numerous city markets.

If you are coming to Thailand on a real vacation and are eager to swim and sunbathe, visit one of its many beautiful islands Ko Tao, Ko Phi Phi Don, Ko Chang, and Ko Samui. Be careful with sun exposure as it will force you to hide under the thick shade of a palm tree in less than 5 minutes.

The best time to visit Thailand is between November and February, when the rain season is over and temperatures are acceptable. At the same time you will have the opportunity to see many interesting festivals like Loi Krathong, dedicated to the Water Goddess, where Thais give their respect with thousands of floating flower arrangements that light up the whole kingdom under the full moon in November.

Drink only bottled water. There is no danger during the night because the city never sleeps. Tuk-tuk is typical transportation device on three wheels, and city buses are regular. Taxi motocycles are popular and cheaper than regular taxi vehicles.

Keep in mind that Thailand is one of the rare countries in the world where possession and consumation of narcotics is punished even with death penalty.