Cambodia is located in the southeastern part of Indochina. It is surrounded by 2572 km land border with Thailand, Laos and Vietnam, its neighbors with whom Cambodia has a turbulent past.

Cambodia is located in the southeastern part of Indochina. It is surrounded by 2572 km land border with Thailand, Laos and Vietnam, its neighbors with whom Cambodia has a turbulent past.

The southern part of the country has an exit on the Gulf of Thailand and part of the South China Sea. The biggest attractions of Cambodia are Angkor temples, masterpieces of Khmer architecture, which was declared a protected world cultural treasure of UNESCO in 1992.

The country occupies an area of ​​181,040 square kilometers, and according to the census from 2004 it had approximately $ 13.6 million people living in it. The capital Phnom Penh has a million inhabitants, located in the interior of the country, at the confluence of the Mekong River Sap. Although it was set up in 14th century, Phnom Penh is the capital since 1867. It is a political and cultural center with the university, the Royal Library and other landmarks.

The majority ethnic compositions of Cambodia are Khmer (90 percent), Vietnamese (5 percent), Chinese (1 percent) and others (4 percent). The official language is Khmer, and the main religion is Buddhism with 95 percent of the population.

It has a monsoon climate and the heavy rainfalls are brought by the so called southwestern monsoon.

Cambodia is predominantly a lowland country and the highest mountain peak is Mount Aural (1,813 km). Through Cambodia flows a part of the Mekong, one of the longest rivers in Asia, and a special attraction is the lake of Tonle Sap, with the surface of approximately 10,000 km2, which is located in the center of the country. Its surface significantly increases during the rainy period.

Although it has a very low unemployment rate (3 percent), Cambodia has a very low gross national product, only $ 1,900 per capita, according to data from 2004. More important source of income for the population is rice, fish, fruits, timber, livestock, rubber and precious stones. Production of clothing, footwear and tourism has recently started to develop. 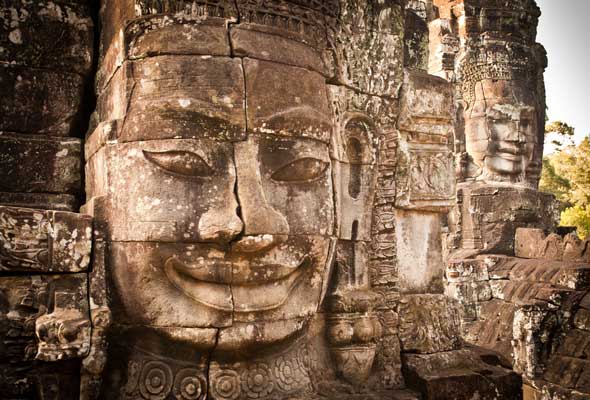 Due to the decades of long wars and dictatorial regime of Pol Pot and his Khmer Rouge, Cambodia is unfortunately still one of the poorest countries in the region. It started to stabilize politically since 1993 when the kingdom was re-established.

The country is governed as a parliamentary monarchy, headed by King Norodo Sihamoni, who succeeded his father Norodo Sihanouk on the throne in 2004. Khmer Empire, which existed from 9th to 15th century has been reconstructed after almost 600 years. The center of Khmer Empire is Angkor, which is on UNESCO’s World Heritage list. Every year millions of people visit it.

The golden period of the empire began in 802, when the Khmer Hindu monarch Jayavarman II. proclaimed himself as god-king. The golden period lasted until 1431 when the Thais captured and sacked Angkor. The remains of Angkor are in a wooded area north of Lake Tonle Sapa and south of Mount Kulen, near the town of Siem Reap. In Angkor there are thousands of temples which extends over 640 km2. The most magnificent temple is Angkor Wat which is considered the largest religious building in the entire world.

Siem Reap – the most popular tourist destination and the fastest growing city in Cambodia. The main attractions of Cambodia are temples of Angkor located near the town Siem Reap. They are masterpieces of Khmer architecture which were declared as a protected world cultural treasure of UNESCO in 1992. The main temple of Angkor Wat is the symbol of Cambodia and is shown on the national flag.

Official Language: Khmer, communication in English
Religion: Buddhist (95 percent), other religions (5 percent)
Currency: riel (KHR), U.S. dollar (USD) is widely accepted, the exchange rate $ 1 = 4.3 riel
Climate: tropical, average day temperatures around 30 ° C
Time difference: + 6 hours
How to travel: the fastest and easiest way is to take a plane to the airports in Phnom Penh or Siem Reap
When to travel: The best time is during December-February
Diseases and Prevention: Vaccination is not mandatory
Visa: required, it costs $ 20 and you get it when entering the country (passport must be valid for at least 6 more months from entry and you need 2 photos)
Water: Drink only bottled water
Recommendation: take out travel insurance from some insurance companies
Accommodation: in Phnom Penh you can stay in three-star hotel Lucky Star for $ 15, four-star hotel Landscape for $ 58 or, for example, five-star hotel Raffles Le Royal for $ 207.
Restaurants in Phnom Penh: delicacies of Khmer and Vietnamese cuisine are worth trying in the restaurant Tonle Bassac, while the local cuisine combined with European (primarily French) can be found in restaurant Tell.