Islam began developing in the 7th century AD, which makes it the youngest of the four major world religions.

According to lore, it all began when Muhammed ibn Abdullah, an illiterate merchant and shepherd from Mecca, began retreating to a cave for several weeks every year to meditate. During one of these visits, melek Jibril (the angel Gabriel) appeared before him. The angel revealed to him the first few parts of the holy text that will later become known as the Qur’an (the process of the revelation of the entire text lasted 23 years!), and three years after this event Muhammed began to publicly preach his new discoveries. He taught that there is only one god, Allah, and that the only correct way of worshipping him is to totally submit yourself to him – thus the meaning of the world ˝Islam˝ itself is ˝submission˝, while a Muslim is ˝one who submits to God˝.

According to Islamic belief, many of the prophets of old – among which are many Biblical prophets, Jesus included – had already tried to relay the teachings of Islam, but their message was always misinterpreted. This is why Muhammed was send as the ˝seal˝ of all prophers to transmit God’s final revelation, the Qur’an, and bestow upon humanity the ultimate truth – Islam as the only correct way of worshipping and believing in one God, Allah.

Islamic practice is grounded in five basic duties, i.e. the ˝Five Pillars of Islam˝: shahadah (the Islamic creed, i.e. belief in one God, Allah, and Muhammed as his prophet), salat (prayer and prostration), sawm (fasting during the holy month of Ramadan), zakat (alms-giving) and completing hajj (pilgrimage to Mecca) at least once in one’s lifetime. Therefore, pilgrimage to Mecca is not only of utmost importance, but the obligation of every able-bodied Muslim has the means for doing so. A pilgrimage is considered a hajj only if it is performed at a certain time (in the last month of the Islamic calendar), while going on a pilgrimage to Mecca at any other time in the year is called umrah. For Muslims, Mecca is a city that is permeated with the sacred – here is Kaaba, the holy stone towards which Muslims turn when praying, no matter where in the world they find themselves (it is said to have been constructed by Abraham himself), and it is surrounded by the most sacred mosque in the world, the Masjid al-Haram. 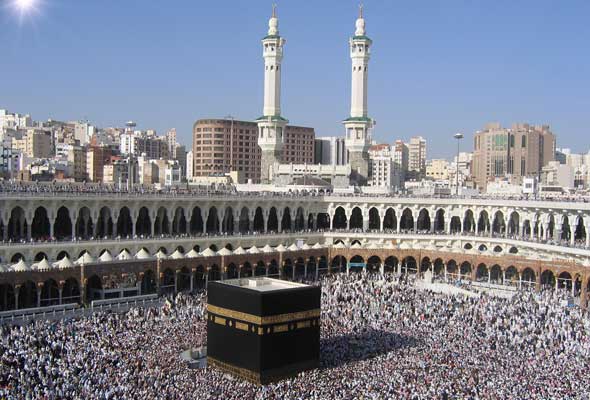 During their participation in the hajj, pilgrims wear a special kind of white garb (ihram clothing) and adhere to certain rules of behaviour (e.g. any kind of cosmetics are strictly forbidden), while a popular souvenir to take home is water from the holy Zam Zam well. However, if you’re not a Muslim, don’t look forward to being one of the 2 million people that particpate in the hajj each year, or even witnessing this spectacle from afar – not only is it forbidden for non-Muslims to participate in the hajj, but they are also prohibited from entering the city of Mecca at all! The bus terminal outside Mecca is the closest that non-Muslims can come to this holy city, and if they are to wander any closer they put themselves under the risk of being deported or even placed behind bars.

Non-muslims are also prohibited from entering the centre of the second holiest site in islam, Medina, where, according to lore, the prophet Muhammed settled in 622 (his migration is known as the hijra). However, the third most sacred mosque in Islam, the Al-Aqsa mosque in Jerusalem, allows foreigners access at certain hours on certain days. Although, according to the rules of Islam, those that do not folow Muhammed’s teachings should also be allowed to enter mosques, openness towards foreigners varies from country to country – while, for example, most mosques on the Arab Peninsula and in Morocco forbid non-Muslims from entering, there are also many places in the Muslim world that gladly accept foreginers. However, one should bear in mind that, in a mosque, the same rules go for both believers and non-believers – it is obligatory to take off your shoes, wash certain parts of your body before entering and to wear appropriate attire (long trousers for men and covered hair for women).