Republic of Kosovo covers about 10 thousand square kilometers in southeastern Europe. It borders with Macedonia in the southeast, with Serbia in the east and north, Albania in the southwest and Montenegro in the northwest. This is a young country, which declared independence at the beginning of 2008, and eighty countries recognized it, including Croatia. Serbia, however, still consider it a part of its territory, that is an autonomous region of Kosovo and Metohija.

In terms of relief, we can call it a mountain land, which occupies the central part of the Balkan Peninsula. It is assumed that it has around 2.2 million inhabitants, of which a majority are Albanians (90 percent) and Serbs (5 percent). Croatian minority is also present – especially in Janjevo and surrounding areas.

The capital Pristina – is located in the northeast, near the mountain Goljak, and it is a cultural, economic and educational center of the country.

Kosovo’s cuisine has grown and developed under various influences – from Albanian to Italian. Here they like to eat calorie baked and fried foods made ​​from meat, beans, potatoes and dairy products. On the menu you will inevitably find sweet and salty dishes of different doughs like burek, cassock, pie, cheese and vegetables and baklava and tulumba. Food is served with Russian tea, a fermented drink made ​​from corn flour – bozo, lemonade and fruit juices, and to a lesser extent, the Kosovo branch, and locally produced wines.

Explore Pristina and its cultural and historical attractions. Be sure to take a look at Čaršijska and Imperial mosque and SAHAT tower which dates from the early 20th century. Here you can visit the 25 meter high monument set to commemorate the battle of Kosovo, as well as Murat and Gazimestanski mausoleum. Close to the town visit the remains of a Roman settlement Ulpiana.

Visit the town Decani in the Metohija valley in the west of the country. It is the most famous for Orthodox monastery of High Decani, which dates from the early 14th century established by king Stefan Uros III. Dečanski. This cultural monument is known for best-preserved frescoes in the Balkans, for which it was placed under the protection of UNESCO. 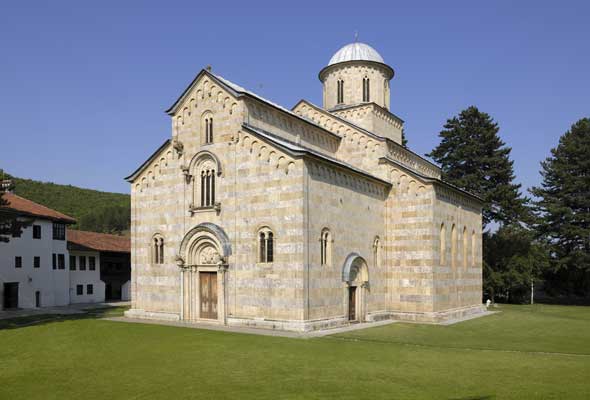 Gorani are old South Slavic people, who inhabited the area above the border of Kosovo, Albania and Macedonia. They speak nasenskim language – a combination of Old Serbian and Macedonian language, and are mainly engaged in animal husbandry. If you want to discover their traditional crafts and customs go to the beautiful village Brod in the south.

Kosovo has all the prerequisites for the development of winter tourism, but the same is, unfortunately, only in infancy. Most organized and most visited place is the Brezovica ski center which is situated in the north side of the Sar mountains, in the municipality of Strpce. Maintained trails lie at an altitude of 900-2500 meters.

National Park Sar Mountains stretches at about 39 000 acres, and gathers stunning natural landscapes around the eponymous mountain. Park is the habitat of the Balkan lynx, a hundred species of butterflies and twice as many birds as well as a variety of small rodents. The glacial lakes are spread here, and a variety of woods – including the spectacular trees of Bosnian Pine.

Official language: Albanian and Serbian
Religion: Islam (92 percent of the population), other religions and undeclared (the rest)
Currency: euro (EUR)
Visa: not required
How to travel:
BY PLANE: Direct line plane from Zagreb to Pristina
BY TRAIN: There is no direct line – can arrange transfer to Sarajevo or Belgrade
BY BUS: regular and organized international bus transport to Kosovo
BY CAR: from Zagreb to Pristina (740 km), bad roads, so it is not recommended, a vignette is not required
Disease and prevention: special vaccination to enter the country is not required.
When to travel: throughout the year.
Accommodation: Hotel Real and AFA in the capital are a good choice.
Restaurants: Restaurants Platter and Pinocchio in Pristina are a good choice.

Ministry of Foreign Affairs suggests caution when going to Kosovo. This particularly applies to areas north of the Ibar River – Kosovska Mitrovica, Zvecan and Zubin Potok – because of a conflict between the local Serbian population and security forces. Follow the news in the country and obey the instructions of local authorities.

Also, take care of your property and documents around the tourist centers.