Legendary London hairdresser Paul Edmonds has been carving a niche in the industry since 1973, opening his first salon in 1984. Paul has built an enviable reputation over his 30 years in the industry and is trusted time and time again by world-leading fashion designers, actors, directors and editors to work on their most prestigious films, shows and campaigns. The salon in Knightsbridge is the ultimate beauty emporium offering nails, waxing, aesthetics, semi-permanent make up and facials and is the chosen destination for a loyal celebrity following including Catherine Zeta Jones, Michelle Dockery, Margot Robbie, Camilla Rutherford, Christina Hendricks, Emma Thompson, Julie Walters and Sam Smith to name a few.

Q: When did you realise a career in hair was for you?
Paul Edmonds: I’m still waiting to find out if it is the career for me! I kind of wandered into hairdressing; I was going into design when I was leaving school, then when I didn’t get into the design school I wanted to straightaway I started hairdressing to fill in the time in between. The thing about me is I’m a people pleaser, so this is a perfect medium for me; I think design would’ve been worse – you’ve got a lot of other egos going on – but with hairdressing you have a one to one relationship with your client and I think for me that was very important.

Q: What is it about it that your career that you find so satisfying?
PE: You’re making people feel better about themselves and it’s a nice feeling for you as an individual. It sounds like a flimsy thing – that hair makes that much difference – but I really believe that it does. I used to do Alison Steadman’s hair; I went to see her when she was playing the mother in Little Voice – a really hard Liverpudlianwoman – and I said to her afterwards ‘where did you get that voice from?’ and she said ‘oh I got it from my knickers. I went into a Littlewoods store and bought some nylon, leopard print knickers and I thought I’ll put those on and I’ll know who she is’. And as strange as it sounds I think hair can do the same thing, you can show an element of who you are through your hair.

Q: In the past there have been hairstyles which have defined decades, what do you think would be the defining style for this decade?
PE: One of the things now – in hairdressing terms – is that women like to be lots of different people, depending on what context they’re in. They want their hair to be versatile. People used to be much more rigid and so did their hairstyles. If you look at Vidal Sassoon haircuts: if you had a haircut, that was your haircut; if you had a bob, it stayed as a bob. Whereas now, women have a bob that’s cut into and broken up so it can be dishevelled, slicked back or brought forward. Each age does have its moment, I think now is probably the time of the cut-through haircut, whether it’s the short version or the longer. The new lob trend is good because it’s shorter but still feminine.

Q: You’ve worked on various films, campaigns and shoots; are there any which stick out for you as being particularly exciting or fun?
PE: Throughout my time there are particular haircuts that stand out. There was a particular show I worked on called House of Eliott– a Sunday afternoon period drama – about two dressmakers working from the 1900s through to the 20s and 30s. They got to the point where they both cut off their hair, which was part of their contract – and I did the cuts. It was a major thing at the time and very interesting. With Downton Abbey, we did the original cast of that when it started up. Michelle Dockery (Lady Mary) is one of my clients and I cut her hair into the bob, which we imagined was going to feature in the episode in the recent series where Lady Mary cuts her hair, but in the end they used a wig! They said it was easier for the show because it meant they could do the finger waves without her being there. One thing that’s quite nice is the makeup artist and the hairdressers on films will pull you in quite early on and it’s really nice as a hair stylist to be a part of that collaboration.

Q: What are your top tips for healthy hair?
PE: You have to treat hair like an artist treats a canvas. You have to prepare your hair before you do anything to it; you need to use a really good shampoo and conditioner and have regular treatments. There’s obviously a multitude of products you can choose from; we’re quite pedantic about what we use. I’m very much behind ShuUemura– I’m one of their main spokespeople and I really believe in their products. If you use good quality products you’re more likely to get a better result long term. 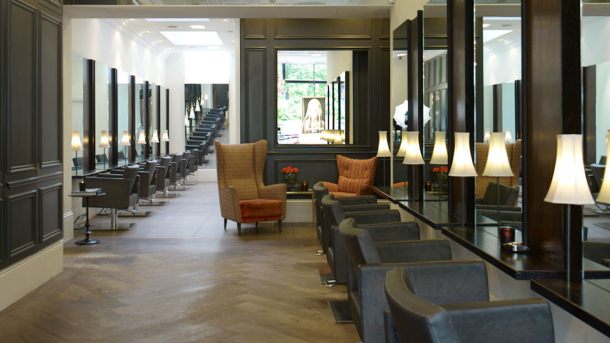 Q: Is there a product you use more than any other?
PE: ShuUemura– Essence Absolue; it’s an oil that you put on the hair which provides protection but also builds up the hair fibre. It’s one of those products that’s very easy to use and very versatile, it gives you hair a gloss and a very nice finish. I think people at the moment want their hair to look as though it doesn’t have much product on it so I tend to stay away from a lot of the heavy mousses and use more of the lighter products, like L’Oreal PLI which is good for giving a light airy feel.

Q: Whose hair would you love to style?
PE: Naomi Watts. She is such a fabulous actress, to my mind one of the all time great actress. She has fine hair that needs to be treated carefully. I would love a chance to make her look beautiful – red carpet glamour or every day gorgeousness.

Q: What sets you apart from other high-end hairdressers?
PE: We’re about being approachable; it’s about approachable luxury so that you feel confident in the service you’re given but not overwhelmed by it. The one thing I hate and one of the reasons I set up the company in the first place is I hated that idea of going into a place and someone giving you the once up and down to work out if you’re good enough to come into the shop. I’m all about encompassing care, so you can focus on meeting someone and making the most of them as an individual.

Q: Do you prefer to work on colour or styling?
PE: Styling. I’m rubbish at colour! I’m quite happy to say that. We have seven at the salon, five of which have colour specialist degrees and I’m much happier consulting with them about colour. It’s important that we have a relationship between the colourist, the client and myself so that we can come up with the goods.

Q: Is there anyone in the world of hair and beauty who particularly inspires you?
PE: Sam McKnight is someone I’ve always loved; I met him a while ago when I was working for Daniel Galvin. He went down the photographic route and he’s just one of those people who consistently comes up with the goods. It’s great when you see someone that you’ve known for a long time who keeps going and is very well respected by everyone. Look at Karl Lagerfeld – he’s no spring chicken but he’s still there doing it and I’m always impressed by someone who can maintain that. It’s not all about flash in the pan stuff, it’s about longevity. Vidal Sassoon, Trevor Sorbie are others that I admire, and John Frieda – who as a businessman is just brilliant. He has built an empire on his products and done it very well; you can find his ranges in places like Boots but you still regard his name as being very high-end and iconic.

Q: What’s next for you?
PE: Our Paul Edmonds London products are going into stores this year; at the moment they’re mainly lifestyle products so body creams, hand wash, candles. We’re also developing hair products, which will be just a small boutique range. It’s all part of the idea of taking home a bit of luxury with you. We’re also looking at opening another salon – in London but I’m not sure exactly where yet. It’s going to be slightly different to this one and unlike anything else that’s out there so watch this space…